Alcoholics Anonymous » Focus on Today, NOT on Past Alcoholism 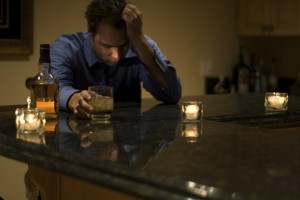 The question often comes up as to whether someone who is trying to quit drinking alcohol outside of a 12-Step program should attend Alcoholic’s Anonymous meetings. Or, whether it is wise for someone who wishes to be sober to “socialize” with those who continually focus on how much alcohol has destroyed their lives, and have story after story to tell you about it.

To put it another way, if you are trying to quit or cut back on drinking and move you life forward, does it really make a lot of sense to surround yourself with those who want you to focus on your past alcoholism?

I am not an advocate for any type of fellowship with other alcoholics, such as what AA does – and the reason is because I strongly believe that this encourages people to continually focus on the mistakes in the past, and wallow in their misery. In fact, it actually perpetuates the problem of alcoholism as people tend to develop “paralysis by analysis”.

That is, they spend so much time on talking about and analyzing their drinking problem, and how much damage it has done to them, that they never get around to actually DOING something about their drinking problem. Simply put, they never learn how to stop drinking alcohol because they’re too focused on reliving the times when they DID drink, and wallowing in self-pity. Concentrating on their past alcoholism is making present-day sobriety difficult.

For example, it is a known fact that many of those who take part in AA-type of 12 step programs make a habit of drinking alcohol immediately before and/or after their fellowship meeting is over. Furthermore, they continue to analyze their drinking problem, tell stories of how their alcoholism has ruined them, and their need to change their lives, while simultaneously consuming alcohol and getting drunk.

They rationalize this behavior because others in the group are also drinking, and that camaraderie somehow makes them feel better (or less guilty) since they’re not the only ones giving in to temptation. Groups like this seldom help the individual overcome an alcohol addiction because all the members are constantly being dragged down to the level of the group as a whole, via group think and the psychology of “misery-loves-company”. In this type of scenario, it is VERY difficult for one person to rise above the group and focus their time and energy on moving forward with their life. There is, however, a solution to this problem. (article continues below)