Quit Drinking Tips » What is a Phantom Hangover? 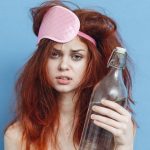 Over 75 percent of moderate drinkers experience a hangover after drinking. This makes sense, where there is smoke, there is bound to be fire, right? But the phantom hangover is something completely different. Some heavy drinkers report that in the early stages after quitting alcohol, they often wake up feeling like they have a hangover without touching a single drink, similar to how some amputees report feelings and sensations in their now non existent limbs. But what causes the phantom hangover after quitting drinking, and what can you do about it?

The Phantom Hangover: What it is and What to do About it

Simply put, a phantom hangover is your body creating the normal symptoms of a hangover when you haven’t had any alcohol. A few days, weeks or even months after quitting alcohol you may be surprised and dismayed to wake up with the old familiar feeling of a hangover. The symptoms may be psychosomatic, or side effects of chemical imbalances resulting from suddenly stopping frequent alcohol use. Some recovering alcoholics say it is “just part of the process” and shrug it away, but it can be a real pain.

People with a phantom hangover also find themselves dragging along, taking hours to get the energy to properly start the day. The thing is that there are usually other factors at play here, you just associate the feeling with drinking because it is what makes the most sense.

What to do About a Phantom Hangover

First and foremost, it’s important to realize that it’s ok to prioritize quitting alcohol over many other aspects of keeping a healthy lifestyle during the early stages of quitting. If you wake up with a phantom hangover and are feeling awful, maybe indulge in an extra hearty breakfast, or don’t feel guilty about getting a donut if it’ll give you a quick cheap endorphin rush to get your brain back on the right track for the rest of the day. Don’t feel bad about napping and being lazy all day if that’s what you need. Take a day off work to do nothing if you can manage to do so without damaging your career. If that’s not an option, get an extra coffee in the afternoon if you need an energy boost. Remember, these are quick fixes, and be careful not to form any new permanent bad habits. But during the early stages of sobriety your main focus should be abstaining from alcohol and it’s ok to not be saintly in all areas of life. Once the psychosomatic symptoms start to subside you should start to focus heavily on shifting to an all around healthy lifestyle.

Sleep makes up about a third of your life, so you had better make it count. 7-9 hours is plenty for most people. While it won’t help with the phantom hangover you have right now, it will help prevent one tomorrow morning.