Random Thoughts » The Ball and Chain Effect of Alcohol Addiction 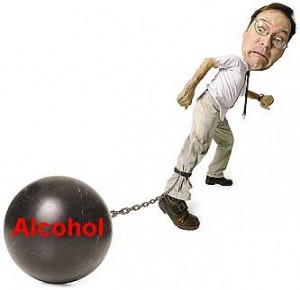 If one phrase ever accurately described the daily life of someone who addicted to alcohol, it would have to be “ball and chain.”

Starting from the moment the alcoholic wakes up, their drinking problem weighs them down – and they struggle all day to work effectively, be at their best, or simply ignore a hangover.

We’re all familiar with the term “ball and chain”, and most of us know that from the late 19th century to early 20th century many prisoners had to wear with such a device. Thankfully we’ve become a little more civilized in how we handle those incarcerated today.

However, the term is still alive. And I don’t mean just in a pejorative manner about one’s own spouse! I mean in connection to alcoholism, and how it literally imprisons those caught up in its grips.

Every little thing becomes much more difficult to accomplish, to get through, or even to put up with – because the previous day’s drinking has taken such a toll in energy and mental alertness.

If this sounds like a typical day in your life, then perhaps it’s time to take a few steps to cut the chain. Begin by recognizing how alcohol is destroying your life, from the inside out. It’s eating away at you on the inside, while it also insidiously sabotages your life on the outside. Start to HATE it for what it’s done TO you.

Cut the Link to Alcoholism

Read 10 Steps to Quit Drinking Alcohol – and keep making every effort you can to cut that ball and chain, and to reclaim your life. If you feel that you can not control your drinking, then at least take a baby step towards sobriety and start to overcome your addiction. Before you know it, the morning will arrive where you wake up and you suddenly realize that you’re free of that ball and chain.

Today, take a step to cut that chain – no matter how small a step it is. You have everything to gain, and you’ll soon start to feel genuinely happy, and excited about your future. ♦